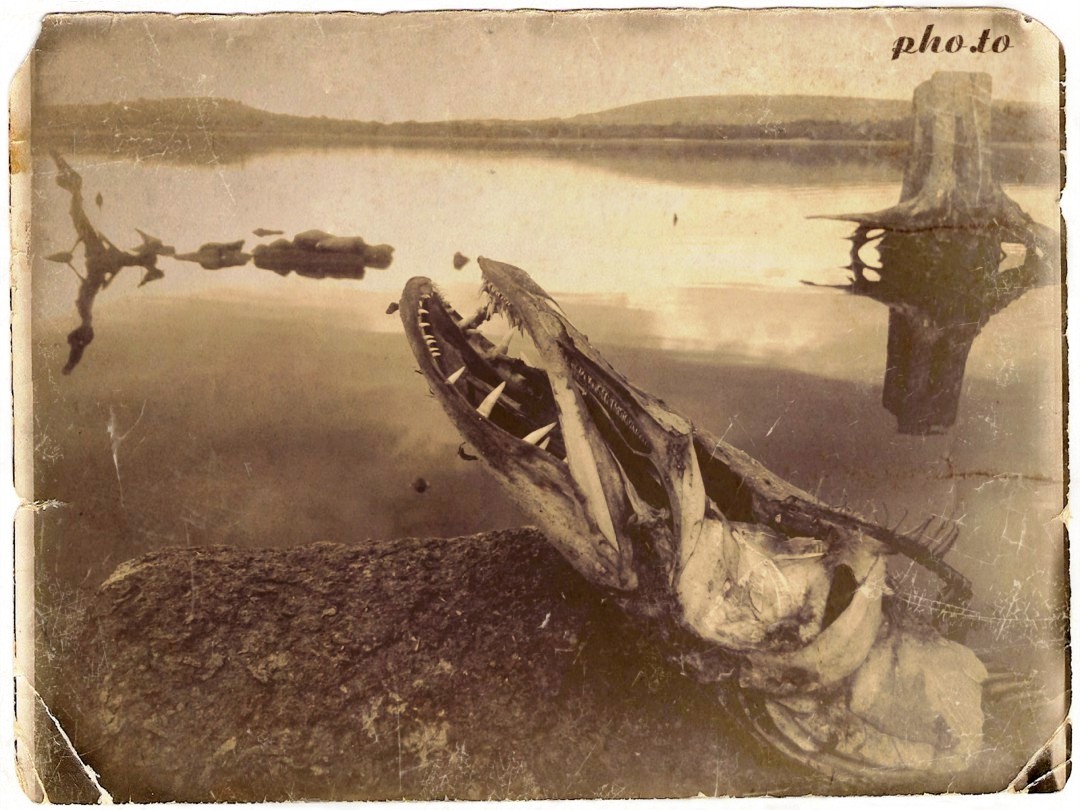 They built a huge wall and stemmed the waters of two rivers; the Liffey and the Kings River. Both had joined at Baltyboys and cascaded into the dark pool near Ballymore Eustace, known as the Devil’s Hole – Pool a Phuca. Legend had it, that a large monster swam in the pool, and was blamed for the strange disappearances of men and beasts over centuries.

Some truth to the old story, but more to the one that began to be heard after the flooding, and is as follows.

The Pookas not only lurked in the pool below the huge waterfall, but dwelt in the deep holes, between it and where the two rivers that had joined at Baltyboys. They were not the evil, shape-shifting goblins suggested by the name given to the lake, ‘Poulaphuca’, but were large pike that grew to monster size, after the surrounding land and villages were flooded in 1940.

Although strong in lore, the monster that had dwelt in the Pool was never described, and is believed to have vacated downriver during construction of the dam. Not so however, for the newly formed lake. 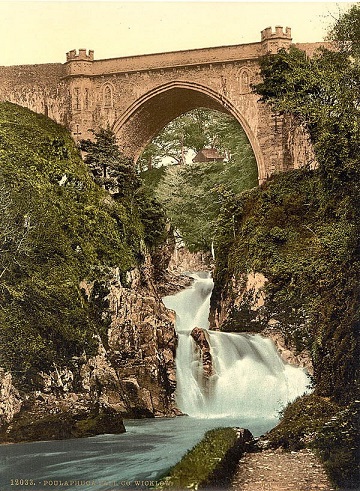 Waterfall into the Pooka Pool (Poul a Phuca)

All man made reservoirs seem to do it. They present a scene that somehow is counter intuitive for those who have lived through the flooding – we know it shouldn’t be there. We can’t explain why, but it leaves a sense of foreboding with some. We have interfered with nature – will there be a price to pay?

The more northerly and westerly ends of the lake, nearer the large town of Blessington and its waterborne activity centers, straddling the busy road that passes along its shore, from Dublin to Wicklow, and on to Wexford, gives it a, ‘part of the here and now’, feeling. The more southern and less accessible parts of the lake, from Vallymount, through the old townland of Monamuc into Blackditches can seem remote.

On an overcast day, with a cold north wind whipping whitecaps down the lake, it will whine through the pillars under the Valleymount bridge, on down into the hidden bay at the mouth of the Kings River. This is quite a different part to the lake.

People have described how, having crossed over the concrete bridge constructed by the Electricity Supply Board, in order to provide access to Valymount after the flood, an eeriness and a coldness is often felt. It is a place that the sun leaves early.

When the land was first flooded to provide the reservoir for Dublin city, a strange phenomenon developed. Land insects moved, and aquatic creatures began to grow and grow. The trout got bigger, the fry got bigger, until they developed an organism that was the death of them. The population of natural trout returned to their smaller size, and then just finally disappeared. Efforts have been made from time to time to return game fish to the lake, but failed.

The course fish grew in numbers and size. After they finished off the remaining trout, they ate each other, and just kept growing. Ordinarily, this cycle would just continue to produce large fish, but the large Pooka pike that had already dwelt in the holes near Pool a Pooka, began to reach enormous sizes.

Stories of missing farm animals were soon heard. Small lambs, piglets, fowl and pets, began to disappear from where they were last seen along the lake shore. Then anglers began to report large pike being caught. Some reported as between 20-30 lbs. These were not the Pookas. The monster pike were those that fishermen had hooked but never seen. They knew they had caught and enormous fish, but never got it in.

Instead, it was consistently reported that they believed their line had caught around the remnants of trees, and had just come fast. Occasionally, it was reported that the boat (engines were not permitted on the reservoir) were ‘dragged around the lake’. Then there were stories of attaching the line to an ass, or a small horse, in order to pull the monster out of the lake. Only, the poor animals were reported to have been dragged into the lake, and never seen again.

The stories of missing animals are associated with every dangerous or forbidding waterway. The stories of missing people are not so prolific, but they too exist, and regretfully so. Pool of the Pooka or the reservoir lake at Blessington, also has its stories. But when the disappearances of animals began, after families had moved from their dwellings before the flood, many in the more southern end of the lake were spooked by the new sense of remoteness, and some left altogether.

Whether it was the whaling, known to carry at certain times, from the ‘cage’ or jail at Marlfields House from long ago, or the squeals of the piglets from the lake shore, when darkness descended around Blackditches, Monamuc, and Ballyknockan, doors were shut up tight.

The house, Marlfields, was erected as a hunting lodge by the La Touche family. It was built on the banks of two small brooks close to eastern bank of the Kings River, overlooking the ancient way to St Kevin’s in Glendalough. The area was popular for wild fowl, and the river produced beautiful brown trout. Some natural trout remain in the river today. 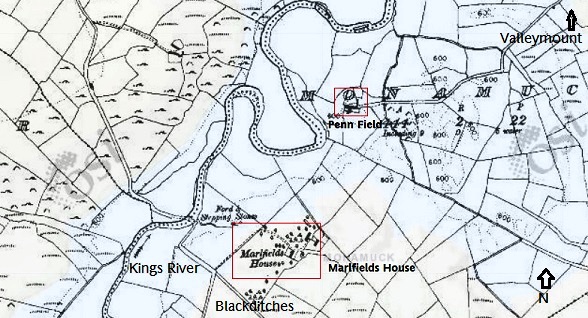 The Kings River became known for its crayfish and mussels, and gatherers have discovered a number of fresh-water pearls there through the years.

Closely connected with St Kevin’s, and the pilgrimage road that passed through, this area has had more than its fair share of archaeological discoveries; tombs, crosses, stone circles, dolmens and so on. 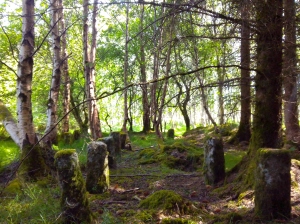 Not long after Marlfields was built, some hunters, while resting for lunch at nearby Granabeg, experienced a remarkable occurrence. One, just quite suddenly, disappeared below ground. An underground chamber was discovered, and after the men climbed into the chasm, they followed a stone sided tunnel until they reached a large stone chamber.

Invisible above ground, the chamber had a ‘stone chest’ within, with a very large skeleton in it. Some artefacts were recovered; a ‘rusty spear, bronze headpiece, and a pea helmet’, and were carried back by the hunters to Marlfields. They stayed the night, and left the next day, the artefacts remaining with the owner.

Descriptions of this find, do not match any of those in the archaeological inventory for that area.

Local people assisted gentlemen to revisit the tomb on a number of occasions, but were unhappy disturbing what was apparently the grave of a very important chieftain.

The hunting ceased with the approach of 1798, and Robert La Touche of Harristown, became a Colonel in the Yeomanry, his father John also served. Neighbors, Captain Brown, at Humphreystown, was also enlisted. Said to have been responsible for placing the huge ‘stepping stones’ (Captain’s Steps) across the King’s River, below Robert’s hunting lodge. 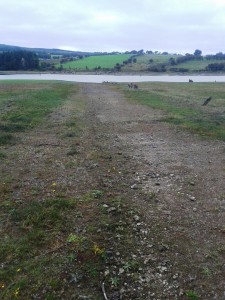 Underwater now, this was the old tree-lined road from Blackditches-Marlfields to Captains Steps, and crossed the Kings River

A band of militia with a bloody reputation, history has it that they chased and fought with the rebels around the Wicklow mountains. Those caught, were imprisoned in a cell or cage at Marlfields. Lore also recalls, that the rebels were flogged and tortured there.

In a bold attack against Blessington and north Wicklow in 1798, Joshua Holt, a protestant leader of the rebels, eventually overran the place and burnt Marlfields House.

Once, ‘a big slated house’, the lodge was reconstituted and downsized to a smaller thatched house, and housed various local people thereafter. Quins lived on the site, and were the last people there before the flood, and passed on their lore, in, ‘Beneath the Poulaphuca Reservoir’.

Marlfields or what became a local dwelling, was not affected by the ‘flooding’ but was deserted for some reason and became a ruin.

[It must have been the case that as well as compulsory purchasing all the land that the water would rise to and cover, an additional margin strip around the perimeter was also purchased and fenced off to secure the reservoir area.] 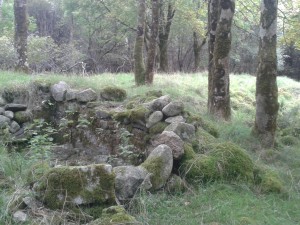 If Quin was half right, it is strange irony then, that soon after, Peter La Touche and his wife Elizabeth had negotiated with Lord Powerscourt and arranged for General Holt’s surrender, and assisted the family’s transportation to Australia. 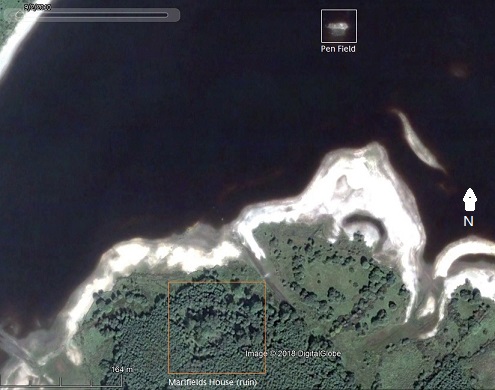 Ruin of Marlfields & site of Pen Fied by Google Earth

In the summer of 2018 there was a long drought, and the level of the lake fell to an unusually low level. During a canoe trip on the lake in August, the author paddled by Baltyboys and Vallymount, to the place called the Pen Field.

What was once Marfields House, is now reduced to a couple of blocks above the ground. The overgrown ruins, consists of what appears to be three dwellings or buildings. The one furthest south was apparently substantial and has the walls of a small room or ‘cell’ attached.

Normally submerged, the area was fully exposed for about a hundred square yards, and dry. It was originally accessed by a small road from Valleymount, and is situated a short distance to the north of Marlfields. The remains of a number of small dwellings were visible, surrounded by the trunk and roots of what were once, large oak trees, as was the old road back to Valleymount. 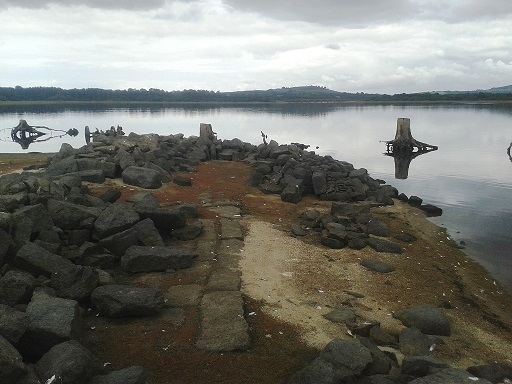 The angler had lost the Pooka, and despite the monster’s enormous teeth, he succumbed to a Wicklow oak.

On reflection, it is easy to see why the pike might have grown so big there, even after the diet of lake birds and piglets became scarce. The receding water of 2018 exposed an abundance of fresh-water mussels, scattered over the exposed lake bed – mostly opened, and the flesh gone.

Pookas, or is it Pooki, have many descriptions. Despite having strong association with Ireland, it would seem every country have their own versions of similar boogy creatures; small evil people, mischievous goblins, luring shape-shifters, and so on. A recurring feature that runs through the tales of these malign creatures is, their ability to appear as man or beast.

PLEASE NOTE:-  All images, text and video contained in this post, can not be reproduced without permission of the authors or accredited artists.

Copyright 2021 Designed and Developed by TeslaThemes, Supported by Imagely LLC