Lost to Time and Tide

Not Alexandria – The Great South Wall?

There were no constructed harbours in this part of Dublin Bay before the early 1800’s. Boats, small ones that is, landed on shale and sandy ground in front of where the wonderful little harbour of Sandycove is now situated. Similarly at Bullock, there was no constructed harbour but there had always been a natural rock harbour which serviced a fishery. Under the castle on the west side there was a quay wall, constructed in the 16th century or earlier. Opposite, behind the ‘High Rock’ at the sewage pumping station at the back of ‘Rose Cottage’-‘Castle View’, there was another sandy shale area where small boats landed, and was known as the Brandy Hole. Like many other ‘Brandy Holes’ around the British Isles, it also has a bygone reputation for smuggling activities. It appears that the sea walls and harbour construction at these two places, as we know them today, did not begin to appear until the late 1820’s. It is believed that the quay wall in front of Neptune Lodge at Sandycove Point might not have been established until later.

When Dublin Bay was considered to have little by way of safe havenage, and even after harbours were built, Scotsman’s Bay and Sandycove was, and still is, considered to be an area where a boat can safely anchor in many weathers. Bullock is also considered a safe harbour for small boats, but anchoring outside is not recommended. And unless the Revenue’s cruiser was tied up and the preventative men were absent from the high rocks along the coast in these areas, then small boats could easily have brought illicit brandy or wine ashore unseen.

There were no harbours shown at Sandycove or Bulloch on Bligh’s Survey of Dublin Bay, 1800, nor on Duncan’s map above.

Locals not only smuggled wine and spirits but people too. When a sailing ship hove into sight off Dublin Bay, men in competing rowing boats – hobblers, would row out to the ship and offer to take off passengers who were in a hurry. The boats would come alongside the sailing vessel and charge passengers for a quick disembarkation, avoiding tide and a time consuming run up the river Liffey. In the main, the practise was legally performed, but on other occasions, unwelcome visitors, both entered and left the country by these means. It was also an area where, in 1731, some of Ireland’s ‘Wild Geese’ are said to have fled the country.

Probably assisted by their own naivety, and like many desperate travellers in strange lands, some intending sail-boat passengers got done. Not so much incoming ones, although I presume they too were sometimes left at places they had no intention of landing, but more the ‘foreigners’, seeking to leave the shores of Ireland. A hobbler, usually rowed by a number of men, would come alongside the quays in Dublin and tout amongst intending travellers seeking passage on a packet to wherever. The hobbler would promise to take them to a ship, either expected or at anchor in the Bay.

To a land shark, the extent of ‘The Bay’, can be easily misunderstood, even today. Dublin Bay was, and is known today, to stretch from Howth Head to Dalkey Island. And as far out to sea as a man standing on Sandymount strand can see, is considered to be its entrance. The opportunity and certainty of securing an early passage could not be resisted, and travellers paid the hobblers for a journey, that could sometimes end between the rocks at the back of the high granite outcrops that pepper the coast, from Sandycove to Dalkey. In some instances, the unwitting travellers, might not only be charged but robbed as well, and then cast ashore to make their way back to Dublin to attempt flight once more.

The hobbler has become an almost generic term, with some confusion arising as to their original purpose. One that, they competitively rowed to meet a sailing ship in order to secure a rope to it. The symbolic gesture signifying a right to claim pilotage of the ship into port. And another, that they took off, or even put passengers with urgent requirements on to sailing ships.

The piloting story would seem to have travelled quite a different route in history but I’m sure like many other ‘definites’, the waters often get muddied. The sailing boats have long gone, but re enacting the hobbling tradition remains. Surviving now in rowing clubs along the east coast, each group in turn, travel from port to port every year on regatta days, to compete with other local hobblers in skiffs, as they are called now, and remain a relatively unaltered craft.

Scattered amongst the rocky shores from Sandycove to Dalkey lay numerous granite boulders, tattooed with the old quarrymen’s working marks. Suggesting quiet accurately that, rocks on the foreshore in this area were worked to build local houses, harbours and piers. Strolling these shores, too many times to recall, I had noticed what seemed to be the remains of an old harbour wall. The remains of this pier or jetty, stretches from the end of Ballygihen Avenue, Sandycove, out to sea towards Howth or Neptune Lodge on Sandycove Point. It ends at narrow sandy bottom amongst the rocks, where a stout boat or boats could have come alongside. It is undoubtedly a pier or landing wall of some description, constructed of cut granite stones but its remains now lie largely below the water – except at low water, when it is clearly visible and can be examined. There is another more visible wall about one hundred yards south. The wall extends out to sea from the Curragh sub aqua club premises, and alongside has been cleared of all obstructions enabling a boat to land safely. One could imagine that, if the line of both walls were extended further out, and these met, this area would have provided a valuable breakwater and quay wall for ships. It is also suggested that there was once a bathing place here.

The puzzling questions regarding these structures are. Who built them? When were they built? For what reason, were they built? And why were they abandoned? The answers are elusive, as there is no memory of it, either in writings or on any maps or charts. Suggesting that it was either built so long ago and fell out of use and memory, or that it was intended to be of a purely temporary nature, and then abandoned. There is no evidence of an outfall pipe either onshore or underwater.

The cut stones that are visible in these walls and others that lay scattered around this pier or landing place, may yield a clue to their origin. It is well known that both Bulloch and Sandycove were used to offload coal but how this was done before harbour facilities were constructed is not known.

In the case of Bulloch, the early quay wall might have been used. In many places around the coast, colliers lay off while they were offloaded by smaller boats or took the ground while coal was removed on a tide. But these were in areas where it was safe to do so, such as sand or shael.

The Great South Wall, that is the entrance to the port of Dublin, took almost the whole of the 18th century to complete during which it underwent many changes in design and construction techniques. Dublin’s civic and commercial buildings which followed, and some of those that already lined the banks of the river Liffey, received quarried stone from as far away as Wicklow, and also from Sandycove and Bullock. Both places been collectively referred to by the Dublin Ballast Board as, Dalkey. As well as from quarries in Dalkey and Bulloch, granite was also hewn from the foreshore for various building projects. The harbours we see today at Sandycove and Bulloch were established on small sandy inlets in these places but not until the early 19th century. So, how was the granite that was quarried and hewn from the foreshore, transported, before these harbours were established? In other words, how were these enormous granite stones got off the shore, and into a carrying vessel which was not only stout enough to carry such a heavy load, but also managed to get in amongst the rocky outcrops to complete the task? 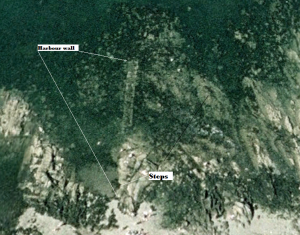 A possibility is suggested by the Brocas sketch of the two collier brigs, Fame & Larch that were reported to have stranded there at Christmas, 1836. The two brigs missed the entrance to Kingstown in a NE gale, and unusually, both ended up in the same place in Sandycove – in the same area as these walls. One can make out the two vessels being lightened in order that they could be refloated, which they might have succeeded in doing, as there was no subsequent report of their loss.

Sketch of stranded brigs Fame and Larch at Sandycove

It is reported that Dublin port had extensive foreshore leases in this area and carried granite from there in ‘lighters’. Once more, a term can sometimes mislead. Lighters were used in the river Liffey in order to lighten ships of their cargo for one reason or another, and move it on up or down the river. These varied widely in type and construction. Some ships took on and were lightened of their stone ballast by boats known as gabbards. These were specially constructed sailing barges designed to take on large quantities of stone and were often depicted mastless, being punted around the Liffey. The stone was passed between the ship and gabbard in kishes. Some of the gabbards were owned and run by the port of Dublin, and others were contracted. Some gabbards used in the Liffey, were interesting, as they were somewhat similar to the sailing barges of the Thames. In that, they not only carried sails but lifting keels fitted to the sides of the boat. These were almost ‘flat bottom’ boats and could dry out on an ‘even keel’ in order that they could be loaded correctly. A second abandoned sea wall nearby and some later steps.

Slightly larger, ‘stone boats’ or hacks, had better sailing qualities and used to transport stone around the coast. The Dublin Ballast Board maintained an unknown number of these hacks, and sailed them from Dalkey with stone for the construction of the Great South Wall. A rather more simple design of ‘vessel’, if one might describe it so, was the ‘float’. Quite a number of these were owned and operated by the Ballast Board. As you might imagine, this was essentially a raft, but could apparently ‘sink’, and like sailing vessels, they were constructed in different sizes. They had many uses, but in this case, they were used to receive stone from the gabbards and provided a platform on which men could work over the wall. Some were fitted with cranes for lifting heavy balks of timber and stone, and even ‘piling engines’. These floats could easily bottom out on suitable ground during low water. The foregoing offers no conclusions or answers, and is only designed to record some unusual archaeological features within a beautiful bay, which seem to have been forgotten and their use gone unrecorded. One wonders, just how old they are? Suggestions please.

Many thanks to Google Earth for images.

PLEASE NOTE:-  All images, text and video contained in this post, can not be reproduced without     permission of the authors or accredited artists.