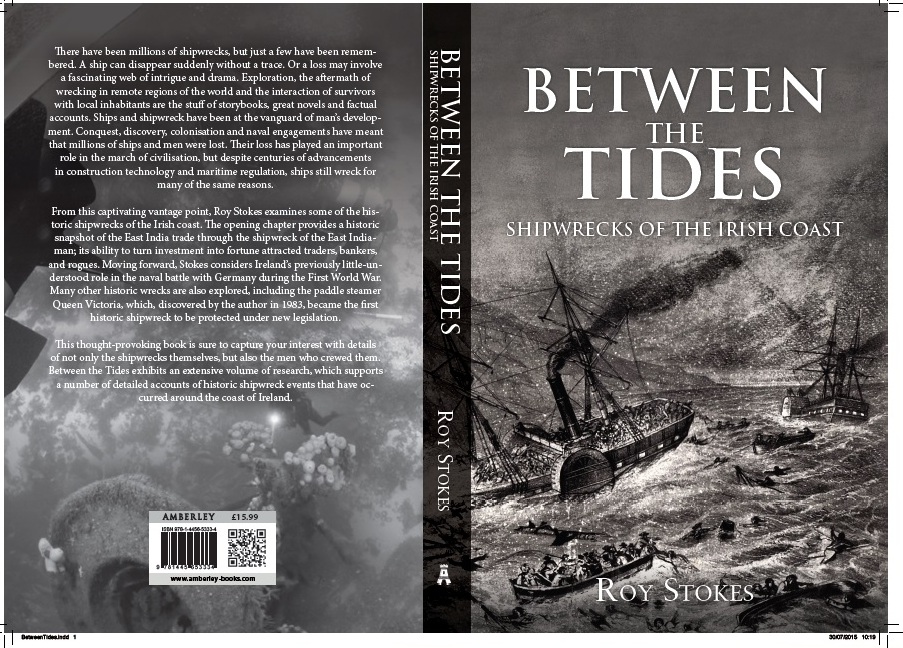 Between The Tides (Shipwrecks on the Irish Coast) 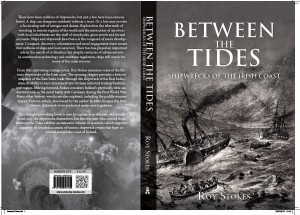 Between The Tides is a new book just launched by the author of this site.

Supported by a large volume research, and accounts of a number of historic instances that have occurred around the coast of Ireland, the author sets out to examine the history of shipwreck, and the reasons why so many ships have been lost. These are enhanced by his searches for lost shipwrecks, and his diving experiences and discoveries.

There have been millions of shipwrecks, but just a few have been remembered. A ship can disappear suddenly without a trace. Or a loss may involve a fascinating web of intrigue and drama. Ships’ owners and their lust for profit: the skimping on crewing, a vessel’s seaworthiness, an incapacitated or murderous crew, or the deliberate destruction of a ship and a fraudulent claim on insurance.

The violence of such an event, will often impact on the fabric of man’s character, sometimes producing great acts of courage, and others that have proved shameful.

Exploration, the aftermath of wrecking in remote regions of the world, and the interaction of survivors with local inhabitants is the stuff of storybooks, great novels, and factual accounts. Synonymous, ships and shipwreck have been at the vanguard of man’s development. Conquest, discovery, colonisation, naval engagements, have meant that millions of ships and men were lost. Their loss however, has played an important role in the march of civilisation.

Salvage of shipwrecks and their cargoes, has also produced epic tales of adventure, and a belief that there is huge wealth to be wrestled from shipwreck and the sea, more easily than from a bank. ‘Between the Tides’ has its own fascinating accounts of salvage, by some who succeeded, and others who mysteriously died in their attempts.

Many have died while trying to wrestle riches from the remains of ships strewn on the seabed of the oceans, many more continue the quest. A few have been lucky.

All of these related subjects; ships, wrecking, wreckers, early diving and salvage, fraud and murder, famine and emigration, naval engagements, are addressed with research of historic instances, from the Spanish Armada of 1588 to the submarine attacks in Irish waters during WW1.

Some contemporary commentary on the return of slavery, people trafficking and shipwreck in the Mediterranean is also included.

The chapter ‘SHIPWRECKS’, is a snapshot of the interest that has been generated in shipwreck and salvage, and the ‘fascination’ that has grown in the subject from the earliest times to the present. It is a history of ships and shipwreck from the ancient to WW1.

The causes of shipwreck are examined in some detail, and might seem to have been so many and varied that, it is more than one could estimate. However, despite all the technical and social progress to date, these have hardly changed all. The reader will discover that ships still wreck for one or all of the same three reasons.

The ‘Wreck they Keep Secret’ is the story of a large east Indiaman built in Liverpool in the 18th century, ostensibly for the Habsburg Empire, but secretly being run under a ‘flag of convenience’ by a syndicate of international businessmen and adventurers. She was lost off Dublin within twenty fours of setting sail from Liverpool for China.

Carrying a fortune in silver, an attempt at salvage began almost immediately, but failed. Two notable Scottish bell divers of the period, died during the attempt, from an unknown cause. Along with a small team of divers, the author has been attempting to relocate the remains of the ship for a number of years.

‘The Wreck of the Queen Victoria’, although responsible for a considerable loss of life when she sank in the mouth of Dublin harbour in 1853, might not be remembered as a significant event. As shipwrecks and loss of life go, the event paled in comparison to the four hundred passengers and crew that were lost on the emigrant ship Tayleur, the previous year, when she wrecked on Lambay Island, off north county Dublin.

Significantly, the Queen Victoria was rediscovered by the author and the Marlin sub aqua club in 1983, and the find prompted changes to legislation protecting historic shipwrecks in Irish waters. The wreck was the first of its kind to be issued with a Protection Order, made under the National Monuments Amendments Bill.

‘Into the Yawning Abyss’ is the story of Ireland’s worst emigrant shipwreck disaster. A relatively new, popular, and well built American clipper ship, the Pomona, was lost off Blackwater, county Wexford, in 1859, with the largest loss of emigrants on the Irish coast. The figure stands at 424, mainly Irish emigrants sailing from Liverpool to America. Twenty four were saved, these proved to be crew.

Those lost were mainly Irish emigrants, which included Henry Lavery, father of the famous artist Sir John Lavery, whose wife of some controversy, Hazel, appeared on Irish bank notes for over half a century.

The wreck was discovered by a team of divers and the author in 2013, and is described in the chapter along with – why not one passenger survived the tragedy!

The chapter, The ‘Drowning Command’, is a compilation of events that occurred during WWI in the Irish Channel, known here as ‘U-Boat Alley’. The part Ireland played in the naval battle with Germany, and the extent to which German submarines operated around the whole coast of Ireland, is still not understood. This chapter describes a number of incidences were ships were attacked and sunk by some notable German submarine commanders during 1917.

German minelayers might have changed the course of the war if ‘extreme’ measures had not been taken against them, measures that are still shrouded in some secrecy. Diving to some of these wrecks is described by the author.

The ‘Well Head of all Pyrates’ is an account of ships and trade along the west coast of Ireland, famine and a chronology of shipwrecks that occurred in and around Broadhaven, county Mayo. Research has been assembled from earliest records available to the present time, and previously unknown details of particular shipwreck events are provided.

A theme of tackling the folklore of ‘wrecking and wreckers’ that existed around Great Britain and Ireland, its occasion, and the misconceptions that are held by many, runs through this book . This chapter examines the practise in some detail, and highlights how it became a vexed question in many instances, and the cause of improper retribution by the authorities.

Any part of this article that is subject to copyright cannot be reproduced without permissions.